By Karen A. Frenkel These findings support the idea that ongoing measurement and management of companies’ IT infrastructure is needed to optimize performance, energy use and ROI. Removing idle servers would result in 4 gigawatts in reductions in global IT load. Displaced power could then support new IT loads that deliver business value and innovations. 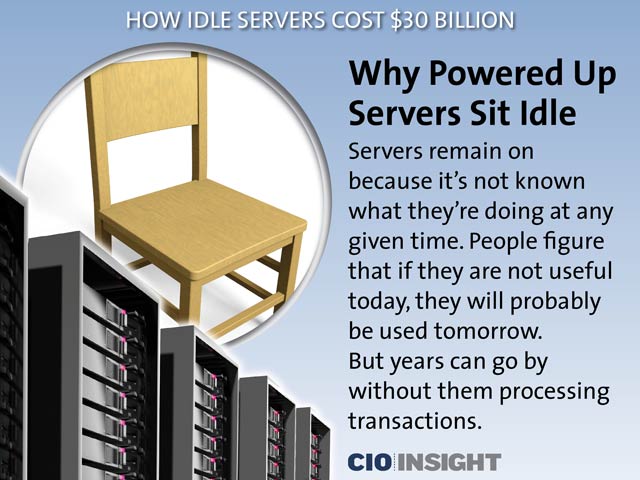 Why Powered Up Servers Sit Idle

Servers remain on because it’s not known what they’re doing at any given time. People figure that if they are not useful today, they will probably be used tomorrow. But years can go by without them processing transactions. How much redundancy is too much? Today, much redundancy can be eliminated because it’s built into the app, as opposed to the infrastructure supporting it. Analytics today allow for plant capacity. Farms Vs. the Cloud

With server analytics, companies can determine whether it is more cost efficient to run a transaction in their own data center or in the cloud. If you only do payroll bimonthly, it may make sense to contract the farm and offload background transactions to the cloud when you’re not doing payroll, for example. In business, people insist on having their own servers because that makes them feel more secure. In academia, servers are purchased according to grant allocations and budget lines, which can result in a huge capital investment doing nothing. That’s a management problem. Data center operators should look at upstream traffic or user access information per server from central IT management, virtualization and workload distribution systems. This identifies IT resources not doing useful work so that they can be decommissioned without adding risk to the business. Using servers only when needed does not just save power. It frees up capacity and results in fewer licensing fees for software. Server analytics enable you to know how apps are broken down and track how they’re processed on computers and when. Server Analytics Is a No Brainer

“If you can make improvements without changing what you do, save money, increase capacity, and it’s good for the environment, why would you not do it?” asked TSO’s Aaron Rallo.

Renown Health Transforms Its IT Environment