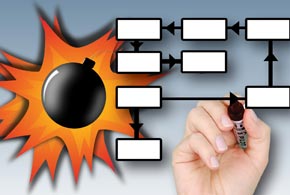 Tech teams contend with at least a half-dozen unexpected issues per week that could be avoided with better planning and automation. 56% of organizations are operating in a chaotic state when it comes to IT service delivery. Tech departments deal with an average of six unexpected IT issues a week. All Hands on Deck

Each of these issues takes three hours and 16 minutes to mitigate, involving the efforts of eight IT staffers. Two-thirds of IT managers said their organization has experienced a cloud outage, indicating that these outages could have been avoided. Nearly three of five said the outages are due to improper IT health and risk management. 97% said their department’s efficiency could be better. 61% said efficiency would be improved through better IT optimization, and the same percentage said server consolidation to reduce infrastructure administration workload would help. 55% said more or better diagnosis, trending or analytics tools would boost IT efficiency, while 54% said more focus is needed on the company’s reactive processes. IT managers said their staff spends just 10% of its time on proactive, improvement activities, such as application tuning, server tuning, data management and IT risk avoidance. Only 17% said their company is able to optimize IT operations through proactive, automated actions.