The personality type of CFOs can have a big influence on how resources are allocated for new tech initiatives. CIOs take note. Only 9% of CFOs are considered Visionaries, preferring to make decisions based upon experience and intuition. 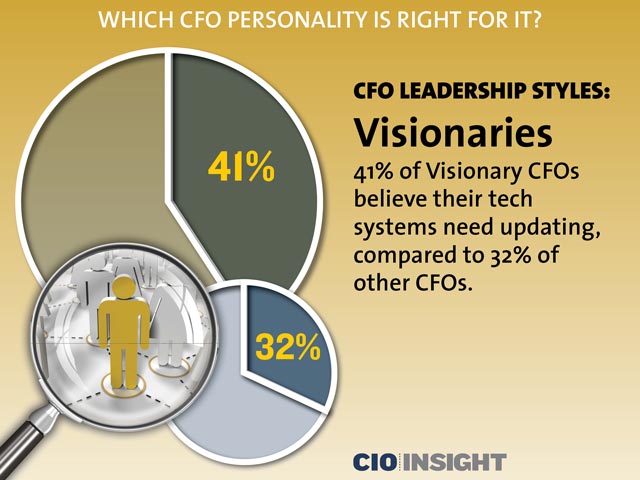 41% of Visionary CFOs believe their tech systems need updating, compared to 32% of other CFOs. 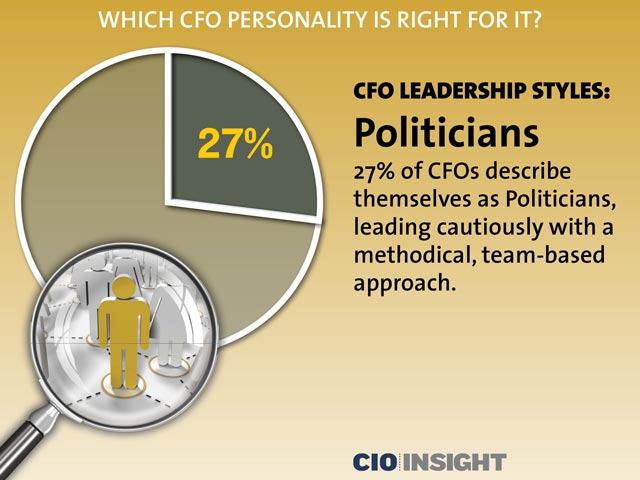 27% of CFOs describe themselves as Politicians, leading cautiously with a methodical, team-based approach. If you seek greater investment in collaborative tech, the Politician is for you: 27% believe that collaboration is a key challenge that needs addressing, compared to 22% of all CFOs. 19% are considered Revolutionaries, embracing changes in corporate culture and structures. They take a maverick approach to data, happy to source it outside of designated business systems. 48% of Revolutionary CFOs say the IT support they receive is inadequate, compared to only 36% of their counterparts. 16% view themselves as Conductors, setting tough goals for themselves and others. When it comes to tech stuff, give ’em high-level summaries instead of extensive, gritty details. 54% of Conductor CFOs prefer to make decisions based upon “gut feelings” rather than hard data, compared to 46% of their counterparts who do. 19% say they’re “Carers,” likely to delay a decision rather than risk a mistake. Less than half of them feel they’re not getting enough good information about product financial performance, while 57% of CFOs in general are satisfied with the information they receive. 52% of “Carer” CFOs are greatly concerned about a lack of access to accurate data, as opposed to 44% of their counterparts who share this concern. 9% think of themselves as Traditionalists, who prefer to work with time-tested systems. They also resist getting influenced by anyone’s reputation or personality.

Status-quo runs the show here: Just 14% of Traditionalist CFOs believe their business IT systems should be updated.