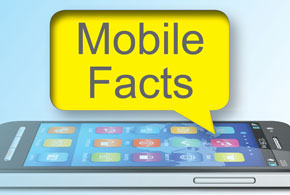 67% of CIOs and IT professionals believe mobility will impact their organizations as much—or more—than the Internet did in the 1990s. 85% of enterprises still have no plans to employ a single leader for mobility, despite mobile’s anticipated impact upon their organizations. The number of worldwide business and consumer mobile users will increase to 6.2 billion by the end of 2018—accounting for 84% of people on Earth—up from 5.6 billion today. One-half of companies will require employees to use their own device for work by 2017. 4.4 billion people will use mobile apps by the conclusion of 2017, growing by nearly 30% every year. The Apple App Store and Google Play together offer more than 1.6 million apps. The current app world market—now estimated between $20 billion to $25 billion—will triple by 2017. Global mobile ad spending is forecast to reach $18 billion this year, up from just over $13 billion in 2013. 64% of users with smartphones have made a mobile purchase after seeing a mobile ad.