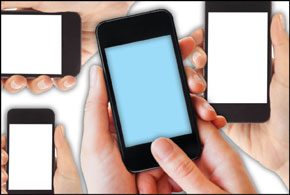 48% of survey participants say they wouldn’t hide the fact that they’re using a smartphone in a place of worship. 77% would openly use their smartphone in bed. 58% confess that they’ve pulled out the smartphone while spending “quality time” with family, and 62% have done the same around friends. 75% wouldn’t conceal using a mobile device in a public restroom. 28% have used their smartphones while on a date with a significant other. 35% admit to pretending to use their smartphone in order to avoid talking to someone. 33% have used their device to appear busy while alone in a restaurant or bar. 41% reveal that they have used their device to research a topic, to avoid not knowing it in a conversation.