Today’s security solutions have not been designed to protect the Domain Name System (DNS) properly, resulting in data loss, downtime and brand damage. Today’s security solutions have not been designed to protect the Domain Name System (DNS) properly, and 49% of businesses are not even aware of DNS-based malware. 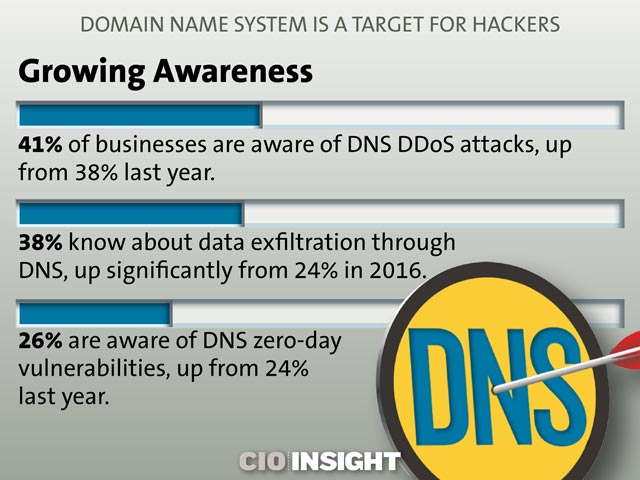 Zero-Day attacks take advantage of DNS security holes for which no patch has been applied. Although 11 critical patches have been released under Bind technology in 2016, 83% of organizations have applied fewer than 7 patches. Firewalls, intrusion detection systems and secure web gateways do not perform complete DNS transaction analyses and are unable to detect exfiltrated data. This year, 28% of respondents who were attacked had sensitive data stolen. On average, it takes more than five hours to mitigate a DNS attack. 45% of respondents spent more than half a day resolving an attack. Midsize organizations with 5,000 to 9,999 employees were most affected by DNS attacks. 34% reported costs between $0.5 million to $5 million. DNS attacks can cost a lot more for large organizations, but they usually recover, whereas smaller organizations find it much harder to recuperate financially.