How Shadow IT Transformed the Role of CIO How Shadow IT Transformed the Role of the CIO 85% of CIOs and other senior IT decision-makers surveyed said the traditional role of the CIO is changing. Top Changes That Are Drivers for CIOs

Shifting customer demands: 96%, Greater need for innovation/creativity: 95%, Increasingly complex policies/procedures: 95%, Significant growth of data coming into and distributed throughout organization: 95%, Employees’ need for organization data when outside the office: 92% 69% of CIOs and other senior IT decision-makers surveyed view the changes as an opportunity to pursue greater innovation/creativity, while 62% said it is allowing them to add more business value to their organizations. More than three-quarters of CIOs and other senior IT decision-makers said either the majority or “some” of organization departments are sourcing and commissioning core tech products/services without involving the IT department (shadow IT). Biggest Concerns About Shadow IT for CIOs 58% of CIOs and other senior IT decision-makers fear that shadow IT may make the role of CIO redundant. Two-thirds said that trends within mobility and unified communications provide to them a critical way to deliver real business results, while 64% cite the cloud. 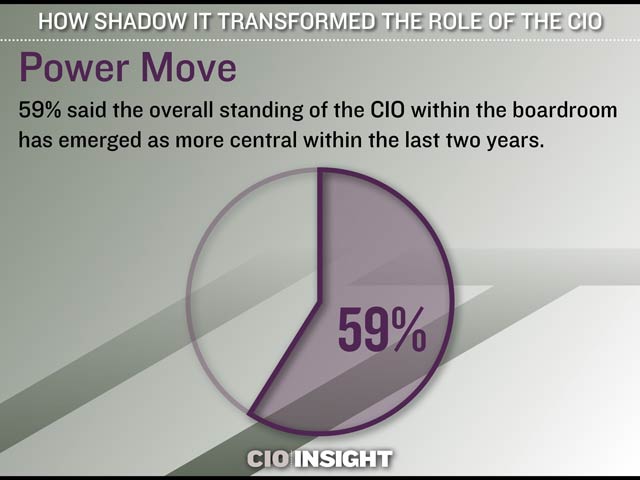 59% said the overall standing of the CIO within the boardroom has emerged as more central within the last two years. 68% said board expectations for CIOs have increased in the last two years, and 64% feel that their board recognizes the need for a creative CIO.