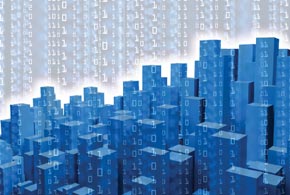 The trend toward smart cities raises questions regarding their vulnerability to hackers. Local government officials and consumers weigh in on what the priorities should be. Leaping from Digital to Smart

To make the leap from digital to smart requires rethinking IT architecture, broadband infrastructure, workflows, user experience, staff training and more. Smart cities must be built on smart foundations. Because the private sector continues to wrestle with big data challenges, it is assumed that local governments, which do not have deep data expertise, will face data-related hurdles. 74% of government respondents have a positive view of smart city developments. Asked about overall priorities, 61% of government respondents named modernizing outdated IT systems and applications. Cybersecurity followed at 55%, tied with innovation and applying technology in new ways to solve problems. Cities with 250,000 or more residents named innovation and applying technology in new ways to solve problems as their top technology priority. 13% of municipalities surveyed report having a fully operational smart cities initiative. 31% of those have a pilot under way. The rest struggle with building a business case for smart cities. Is Government Equipped to Manage Cybersecurity for Smart Cities?

Only 9% of government respondents believe they are well-equipped to manage the cybersecurity component of smart cities. 34% of respondents from local governments for larger cities believe they are mostly well-equipped to handle cybersecurity in contrast to 26% of medium or small city local government officials. 31% of large city government officials said they are well-equipped in some areas and ill-equipped in others, in contrast to 40% of their counterparts at medium or small cities or rural local governments. For the remaining 90% of respondents who do not feel well-equipped to handle the transition to smart cities, the report recommends: Do not reinvent the wheel. Leverage existing planning resources.
In anticipation of rollouts, start staff training and talent retention efforts early.
Strategically engage with technology partners.
Regarding budgeting, try to shift the mindset of cybersecurity as a cost center to cybersecurity as an investment.