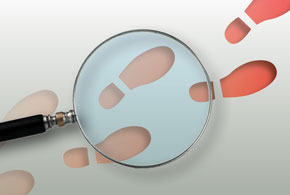 Leave-no-trace malware is one way cyber-criminals are able to avoid exposure and remain undetected on company networks for months at a time. The Transient Nature of Criminal Infrastructure Criminals use only a few IPs per provider to reduce their chances of being caught. During two years of tracking, criminals have used 281 domains and 120 IPs spread across 100 different ISPs. Domains per month in 2015 started in May at 21 and peaked in July at 45. Domains were divided over 12 IPs in July and over six IP s in August for a ratio of 6.5 domains per IP in August—twice as many as July. Why the Inverse Relationship?

Time of year may be a factor. Europeans take summer vacations in July and August so there are fewer resources available to maintain the infrastructure. The crew may have been heavily using the few ISPs they had while awaiting the return of their cohorts. In September, Pony Loader regained momentum. Criminals used 45 domains over 16 IPs for a ratio of 2.81 domains per IP. October also had high numbers: 45 domains divided over 26 IPs for a ratio of 1.73 domains per IP. The number of ISPs was less than two to one with the number of IPs. Slowdown Through the Holidays The criminals behind Pony Loader change their malware. In May it was configured to download the banking trojan Dyre. In Septemberm it downloaded Vawtrak, another banking trojan, which was replaced in December with Nymaim, a form of ransomware. Then it flipped back to Vawtrak. Prevention tools that rely on blacklists and other known indicators will never find these types of attacks. Security teams should look for active command-and-control communications that originate from inside the network and block outbound attempts.