“Reach hither thy finger,” says Jesus to Thomas in the Gospel according to John, and on a recent Sunday morning at Willow Creek Community Church, in South Barrington, Ill., a group of middle-school students appears to be taking that particular bit of scripture to heart.

What they’re reaching for as they enter the massive building amid a throng of fellow churchgoers is a fingerprint scanner, which quickly checks them into Willow Creek for Sunday school. Nearby, parents swipe ID cards through digital card-readers to check in the younger kids. “We need a way to get them in securely and without hassle,” says Mike Gold, Willow Creek’s director of information technology. “When you’re dealing with 3,000 kids, you need to be quick.”

Beyond the high-tech check-in lies a church that is as wired as any business in the country. Inside the 7,095-seat auditorium, the image of Pastor Bill Hybels is projected on large video screens, making him visible to everyone in the crowd. Miss a sermon, and you can catch it later via streaming video on the Web, and then surf over to a church blog to learn more about Gulf Coast relief efforts. They still pass the collection plate at Willow Creek, but they also accept automatic bank drafts. “We can tithe out of a bank account as soon as a check is deposited, so God gets the first fruit,” says Brian McAuliffe, CFO and director of operations.

About 20,000 people attend Willow Creek every week, making it one of the largest churches in the nation. And like other so-called “megachurches”—defined by average weekly attendance of more than 2,000 people—technology is essential to almost every phase of its mission. There are perhaps 1,800 megachurches in the U.S., including a subset of truly gargantuan institutions whose attendance can approach 20,000, or more. And the bigger they are, the more they tend to rely on technology. 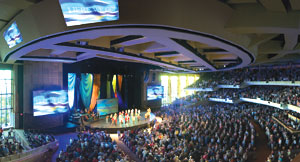 “Technology is essential for a church of our scale,” says Duncan Dodds, executive director of Lakewood Church, in Houston, which has weekly attendance of over 40,000 people, maintains a 60,000-name e-mail list, and meets in a renovated basketball arena once used by the NBA’s Houston Rockets. “You could not do church the way we do without it.” Pastor A.R. Bernard of the 24,000-member Christian Cultural Center, in Brooklyn, N.Y., agrees. At his church, worshippers use the in-house WiFi network to call up Bible verses on their laptops as they follow along with Bernard’s big-screen, PowerPoint presentations. “Technology is a vital and integral part of our setup,” he says. “It is a core enabling element to what we do.”

These tech-savvy institutions are the fastest growing element in religious life in the U.S. “We’re finding about one a week,” says Dave Travis, who tracks megachurches in his role as executive vice president of church innovations at the Leadership Network, a Dallas-based research and consulting group that works with large churches. There have always been large congregations, says Mark Chaves, head of the sociology department at the University of Arizona, where he studies religion, organizations and social movements. But, he adds, the biggest got bigger throughout the 20th century, and the rate of growth has accelerated over the last generation. Historically, Chaves says, the biggest churches haven’t stayed the biggest for very long: “They get overtaken by the next cultural wave of innovation.” Increasingly, innovation is driven by technology, which is a large part of what has allowed megachurches to thrive. Says Travis: “One reason you’ve seen an explosion in megachurches is because of the technological progress that’s been made.”

Religious groups have long embraced the technology of their day, going back to the Epistles of Paul and the Gutenberg Bible and on through to the radio and television preachers of more recent times. In that sense, the megachurches are following tradition, but in many particulars they are changing the way millions of Americans worship, donate and interact with their churches and with each other. Megachurches reflect a culture that is comfortable with enormous institutions, from suburban high schools and universities to retail outlets and banking companies. They tend to be less political than some of their smaller brethren, but still represent a potentially powerful political force. Their pastors wield great financial muscle and public clout.

While they make up only a tiny percentage of the total number of churches, the new breed of megachurches, typically found in suburbia, accounts for perhaps 7 percent of weekly church attendance, according to Scott Thumma, a sociologist of religion at the Hartford [Conn.] Institute for Religion Research. The churches are often unaffiliated with particular denominations, and they span a broad range of beliefs and practices. Taken as a whole, however, their memberships add up to perhaps 7 million people or more—the equivalent of the third-largest religious group in the country, says Thumma, trailing only Roman Catholics and Southern Baptists (with whom their membership overlaps somewhat).

What’s more, the megachurches are growing at the expense of other churches. “Overall church attendance is not going up. People are going to megachurches from other churches,” Chaves says. One factor driving growth, he adds, is cost. “You may have to go to a larger church to get quality, such as a youth minister and more programs, or better facilities.” 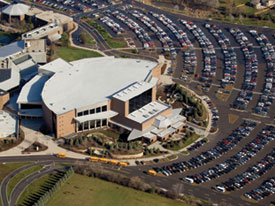 Another cost center is the technology that touches nearly every phase of megachurch life. There are management systems that allow huge congregations to track finances and organize members with relatively few staffers, audio-video tools that help pastors compete for mindshare with the clamor of popular culture, and telecom and Web applications that allow churches to reach outside their walls and start satellite campuses as well as manage national associations that can include thousands of other churches.

Doing all this stuff requires a substantial investment. At Willow Creek, the technology budget tops $1 million a year, out of a total budget of about $27 million. A 15-person IT staff helps support about 50 servers and 600 PCs, two more full-timers work on the Web team, and an army of volunteers helps out with everything from maintenance to design. In order to deal with its growing scale of operations, Fellowship Church, in Grapevine, Texas, developed its own management software, which it subsequently spun out as an independent company called Fellowship Technologies; the company, an application service provider, has more than 240 customers, says CEO and President Jeff Hook, including several of the largest churches in the country, and brings in revenue of more than $3 million per year.