Business tech is a demanding profession, and these compelling works can help you get a better handle on strategic thinking and the human dimensions of technology. Code: The Hidden Language of Computer Hardware and Software

By Charles Petzold, (Microsoft Press/1999). From Kaplan: “Petzold explains how simple on-off switches can be combined into the mightiest of computational machines. Having read this book, you won’t be able to design circuits, but you’ll be able to understand how circuits get designed.” 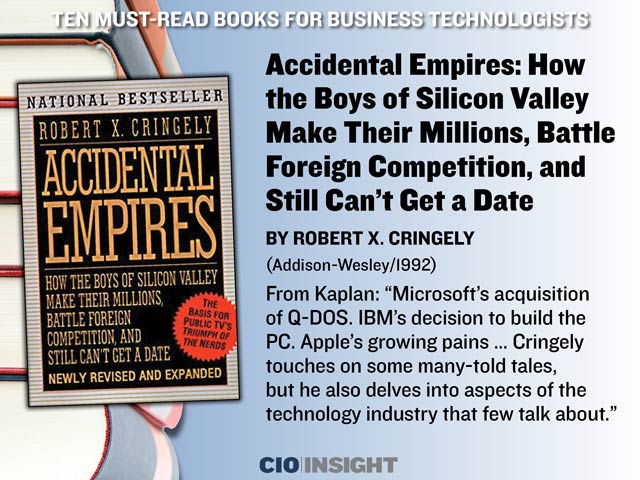 Accidental Empires: How the Boys of Silicon Valley Make Their Millions, Battle Foreign Competition, and Still Can’t Get a Date

By Robert X. Cringely (Addison-Wesley/1992). From Kaplan: “Microsoft’s acquisition of Q-DOS. IBM’s decision to build the PC. Apple’s growing pains … Cringely touches on some many-told tales, but he also delves into aspects of the technology industry that few talk about.” By David Halberstam (William Morrow/1986). From Kaplan: “The Reckoning documents the rise of Nissan and the declining market share of US automakers. Why is this an important technology book? Because it provides a cautionary tale of many of the pitfalls business technologists must avoid: suspicion of new approaches, short-term decision making, managerial distance from frontline operations and distortive managerial accounting.” The Visual Display of Quantitative Information

By Edward Tufte (Graphics Press/1982). From Kaplan: “Tufte points out that communicating information is the purpose of written communications, that far too many charts don’t have much information in them at all, and that well-designed graphics allow us to absorb tremendous amounts of information quickly.” A Fiery Peace in a Cold War: Bernard Schriever and the Ultimate Weapon

By Neil Sheehan (Random House/2009). From Kaplan: “Provides fascinating insights into how … Strategic Air Command deteriorated from an innovative, nonhierarchical organization into a dogmatic bureaucracy and how Schriever and his team convinced the Eisenhower administration to bet on a generational leap from bombers to missiles.” Why the Allies Won

By Richard Overy (W. W. Norton/1996). From Kaplan: “Overy demonstrates that the Allies didn’t just out-produce the Axis—they made better and more rational decisions using the resources they had … Any IT executive who has argued that his or her servers must be configured just so should read the passages comparing how the Red Army deployed a few types of trucks and tanks at scale.” The Cuckoo’s Egg: Tracking a Spy Through the Maze of Computer Espionage

By Cliff Stoll (Doubleday/1989). From Kaplan: “Stoll’s account of tracing a 75-cent accounting anomaly back to a KGB-funded, German spy ring introduced many of us who grew up in the 1980s to the idea of information security. It provides an invaluable reminder that protecting sensitive information depends far more on the ability to ask intelligent questions than on the latest and most loudly promoted security tools.” Show Stopper! The Breakneck Race to Create Windows NT and the Next Generation at Microsoft

By G. Pascal Zachary (Free Press/1994). From Kaplan: “Developing a new commercial operating system (requires) not only big technology bets, but also the coordinated effort of thousands of business analysts, technical architects, developers, testers, product managers, marketers, and others. Zachary … recognizes that such efforts are as much human events as technological ones.” By Nick Montfort and Ian Bogost (MIT Press/2009). From Kaplan: “In today’s multicore world, developing for a platform with the processing and memory limitations of an Atari 2600 is all but unimaginable … (Racing the Beam) explains the coding techniques the era’s developers used to deliver exciting, compelling games. Their creativity and problem solving is an inspiration to technologists struggling to deliver compelling user experiences with today’s far more advanced platforms.”

How the ‘Toyota Way’ Can Drive a Balanced IT Department

12 Amazing Impacts of the Digital Economy

Inside IT With Tech Visionary Charles Araujo